Our chosen form of R&R last weekend was a quick camping trip to Hickory Run State Park in Pennsylvania. It has been more than a year since we have went camping together. Oddly enough we each when while on our separate vacations. While we were lounging about I thought it might be fun to set up an impromptu photoshoot. Get some catalog and add style practice. I also have two very cooperative models.

Doesn’t everything coordinate well?!? Now some of that is not total coincidence and I am partial to orange but wow it looks like I planned this. I tried to focus on a different product in each shot. Josh helped by moving labels around. 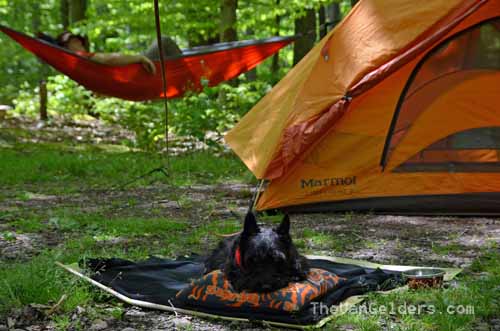 The Marmot tent was easy, being the largest item in the shot. I placed the Travelocity Gnome in the center to make for easy focus.

Capturing the Pillow Pet and the ENO hammock were a bit tricky. While the ENO hammock has such a distinct look I still wanted the brand to show. The pillow pet got lost in the mix, next time I’ll consider putting Pippi on it. Doesn’t she just look precious?