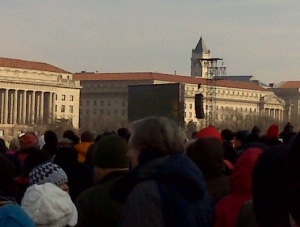 Well we drugged through the street filled with over a million people and ran with crowds to find a spot to stand on the National Mall to watch the swearing in of our 44th President. It was a powerful and beautiful moment to be surrounded by fellow Americans there were all there to support the new administration and to support each other. The cold in the air seamed to disappear when Obama’s speech started. I was filled with a sense of brotherhood and hope that he will accomplish those tasks set forward in his words. As we filed out into the streets it was a mad house but not a single soul was hasty or rude. We all just moved together. The closed off streets were filled with singing and dancing, even as the temperature dropped the air was still filled with electricity. We will be posting more stories and pictures this week.