We traveled to Green Bay this weekend for the first round of Midwest Rugby Playoffs. It was an amazing game, Green Bay took an early lead 31-6 at the half. They are a very strong team. In usual Pig spirit, we brought it back getting the score to 31-25. The last ten minutes of the game were spent this us pinning them to their try zone. Rush after rush, they were able to stop us from getting that one last try we needed to take the game. Now we can all point the blame but if the Sir had called things just a bit differently then we would have done it and with the solid boot Naber had that day the game would have been ours. I am not sure what would have been better, a devastating lose or just not being able to fight for those last points. 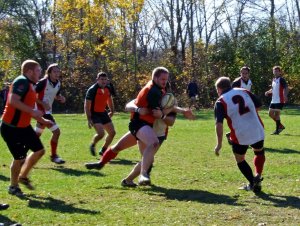 As in past games the Pigs level of fitness is what is keeping them at the top of the ranks. Each close game this year has come down to us being able to keep going when they get tired. Our win would have been a huge upset, now we know that the Pigs are rising and we are something to look at. Next season baby!! 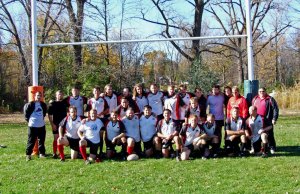 After the game I got to witness a Rugby tradition rarely seen. The retirement of a player at the season end. Most players don’t get to say when they will quit, their bodies tell them. Kato has been playing with the St. Paul RFC for 13 years. After the game he took his boots to the center of the pitch and walked away. The Green Bay Celts were glad to oblige in the tradition of burring your boots. The brought out a shovel and he left his boot forever on the 50 meter mark. Rugby is a very tradition sport and the community around it takes pride is honoring those who have played before you. It was a touching moment to see him surrounded by his teammates, past and present, singing few songs together. I feel lucky to have be able to capture the moment. Kato will never fully leave the pigs, however he is now in the ranks of the Old Boys.